“The Audacity of a Man Who Once Was Blind”

A long time ago, on a Sabbath day, a man blind from birth stumbles, shackled in a prison of darkness.  Jesus of Nazareth finds him, spits on the ground, creates mud and puts it on his eyes.  “Go”, Christ says, “wash in the Pool of Siloam”.

The blind man followed Christ’s instructions and on his way home something wonderful happened.  No longer did he stumble, but now he was sure of his footsteps, in total awe and wonder at the colors of the world around him. For the very first time he can see the blue sky, the golden light of the sun, the faces of his parents,  his very own face. His neighbors are perplexed, unsure if he is the same man who was blind from birth.

He boldly acknowledges, “I am the man”.

The neighbors brought him to the rulers of the synagogue, who immediately judged that whoever healed the blind man on the Sabbath was a sinner.

The Pharisees commanded: “Give God the glory by telling the truth. We know this man is a sinner.” John 9:24 NIV

Disregarding their command, he counters the Pharisees with a gripping response:  “Whether he is a sinner or not, I do not know. One thing I do know. I was blind but now I see!” John 9:25 NIV

With hearts of stone, the Pharisees ask him again, “What did he do to you? How did he open your eyes?” John 9:26 NIV

Without fear of being disrespectful, the man who was blind replies “I have told you already and you did not listen. Why do you want to hear it again? Do you want to become his disciples too?” John 9:27 NIV

The Pharisees hurled insults at the man and said, “You are this fellow’s disciple! We are disciples of Moses!  We know that God spoke to Moses, but as for this fellow, we don’t even know where he comes from.”  John 9:28 NIV

With the force of logic, he answers the religious authorities: “This is an amazing thing! You don’t know where he comes from, yet he healed my eyes.  We know that God doesn’t listen to sinners, but he does listen to anyone who worships him and does his will.  Ever since creation it has never been heard that anyone healed  the eyes of a man who was born blind.  If this man were not from God, he couldn’t do anything like that.” John 9:30-33 ISV

In anger, the Pharisees retorted, “You were steeped in sin at birth; how dare you lecture us!” And they threw him out.”  John 9:34, NIV

For many at that time, to be thrown out of the synagogue would have meant a lifetime of tragedy and shame.

Not this man.  Acceptance into religious and social circles was no longer important to him. For years since birth he had been an invalid, but now, with the gift of sight, he has come to gain an inner power, a new perspective, a reversal of values. A new life.

Then spoke Jesus again unto them, saying, “I am the Light of the world. He that followeth Me shall not walk in darkness, but shall have the light of life. John 8:12 KJ21

Image Credit: Wikimedia Commons, “The Healed Blind Man Tells His Story to the Jews” by James Tissot (1836-1902). This is a faithful photographic reproduction of a two-dimensional, public domain work of art. This work is in the public domain in the United States, and those countries with a copyright term of life of the author plus 100 years or less.

“Fear of the Future and Spiritual Depression”

There are times in life when a person, though mentally fit, experiences a nameless unhappiness in the soul.  It is the same condition reflected in the Psalmist’s lament, “Why are you cast down, O my soul, and why are you in turmoil within me?” 1 This affliction touches many, including Christians, and it is a state that leads to spiritual depression.

One of the causes of spiritual depression is fear of the future.  This was a peculiar problem of one young man in the New Testament named Timothy.  He was dependent on the Apostle Paul, and fears arose with the impending perils that his mentor was facing.  Alongside was a fear of failure in the seemingly daunting tasks that lay ahead of him while Paul was in prison.

Paul addressed Timothy’s fear with a two-step approach:  a reprimand and a reminder. “For God has not given us a spirit of fear, but of power, and of love, and of a sound mind.” 2 Timothy 1:7

Paul reprimands Timothy for being gripped by the spirit of fear: a spirit which does not come from God.  If we suffer from this manifestation of spiritual depression, it is due to our inability as Christians to realize what God has given us and is giving us — the gift of the Holy Spirit. It is being negligent to stir up ourselves, to think, to take ourselves in hand.

What then, has God given us?  First in the list is the spirit of power. Victorious, miraculous power in living the Christian life, in battling with temptation and sin, “a power to go on whatever the conditions, whatever the circumstances, power to hold on and to hold out”. 2

Next, Paul mentions the spirit of love. One of the root causes of the problem is that fearful people are too involved in self. The way to rid of self is to be so absorbed in someone or something else, leaving no room for thinking about oneself.  The spirit of love.

As Christians, we do not live on and by ourselves. Through God’s marvelous work of salvation, He has implanted within us a principle of a divine spiritual life through Jesus Christ. We need to “stir up the gift”, reminding ourselves of who we are in Christ. And casting fear aside, let us move steadily forward in life, giving glory to the One Who gave His all for us.

“Light In Our Dwellings”

Melodies kindled by hearth fires:
the refrigerator murmurs like a cello
in concert with the clanging cymbals of platters,
the violin strings of scarlet wine,
the oboe winds that scatter the leftover
crumbs of bread —

Supper flames are quenched,
night deepens towards the precipice of dawn,
outside the window
the eyelids of frozen branches close,
await the feeble warmth of winter morning.

Foxes have holes,
the graceful gazelle runs homeward
to the ebony forest,
egrets fly to their nests in the fir trees,
the mountain goats climb to their high places.

Praise, praise,
for the laughter of light in our dwellings,
the crimson fire of corpuscles pulsating
with the pendulum of time —

Praise, praise to Thee,
O Giver of Light and Life,
O Source of Strength and Joy.

In a poem “Au Lecteur  (To the Reader)”  by Charles Baudelaire, a preface to his collection of poems entitled “Les Fleurs du Mal (Flowers of Evil)”,  the French poet presents a pessimistic view of humanity’s condition, envisioning a world of hypocrisy, death, sin, boredom, and utter decay, watched over and promoted by Satan himself. This view mirrors the Bible’s perspective of the heart and nature of  mankind without God, as well as the existence of evil, which aims to defeat God’s good and loving purposes in human lives.

The Apostle John writes to Christians at Ephesus to assure them of eternal life through their faith in Christ, emphasizing that they are “of God” while the whole world ” lies in the power of the evil one.”

John portrays the world as under the influence of Satan, an evil power reigning over all its aspects. Satan is diametrically opposed to God, and his ultimate objective is to turn us away from the Creator, using all kinds of maneuvers to disrupt our relationship and fellowship with Him. “The world” is anything that would try to deceive us to feel satisfied without our need for God.

To be “of God” is in complete contrast to the state of the world, and the Apostle seems to imply that it is the only possible dichotomy.  It means that Christians have been taken out of the clutches of the evil forces of Satan’s army. We are initially born into this world under the dominion of sin and darkness, but through the atoning sacrifice of God’s Son at Calvary, we are delivered and brought into God’s marvelous light.

In a positive sense, it implies that we belong to God, His realm, and His Kingdom. Our sins have been forgiven, and we have entered into an entirely new relationship with God, being reconciled to Him through Christ. We are no longer controlled by the evil one, but are under the direction of God and His Spirit, with outward manifestations in our lives.

How then, shall one distinguish between one who is “of God” and one who is not? The great St. Augustine said that the first test of the Christian life, and the second, and the third, is humility.  It is to be like Christ, who, though He was equal with God, thought it not something to be grasped at. He humbled himself to be born into this world like one of us. Humility, then, is the litmus test because the worldly spirit is the very antithesis of it, where pride, arrogance and self-confidence are highly prized, promoted, and encouraged.

To be “of God” means that we are destined for God, to spend eternity with Him. And because of this assurance, we are filled with a sense of awe and wonder at the manner of love that our Heavenly Father has towards us — that we should be called children of God.

“We know that we are of God, and that the whole world lies in the power of the evil one.”  I John 5:19 (New American Standard Bible)

“The Riches of the Poor” 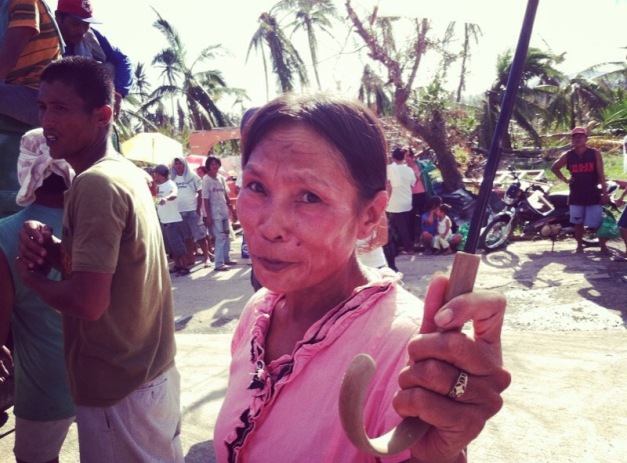 The Riches of the Poor

In the midst of their calamity, they managed to smile. There was an unexplainable calm and peace upon their faces as they fell patiently in line, awaiting their turn to receive water, rice and canned goods.  There was no noise, no panic, nor distress.

They had little to start with, and the little they had, they lost.  They lived in palm-roofed huts that were blown away, and now they huddle under tents of tarpaulin held up by wooden planks. When the rains revisit at night, the fathers and mothers sit in the rain, while their little ones sleep under the sparse canopies.  Help has been slow to arrive. Meek as sheep, they do not grumble. They wait.

A woman who stepped on a nail while braving the typhoon, walked many miles under scorching heat to where relief goods were distributed.  Her foot throbbed with pain as she approached my daughter and me, and she held out her parasol to shield us from the sun.  Other women joined us and offered their parasols as well. They told us they had little to eat, and when the relief supplies run out, they will share what remains with each other. Their sun-parched, emaciated faces somehow reflected an inner joy.

At that moment, I recognized the palpable wealth of the poor: they who possess little do not own the onerous burden of the “cares of this world, the deceitfulness of riches, and the lusts of other things entering in” 1.  I felt the light-hearted freedom in their hearts, the natural sensitivity to gravitate towards gratitude, as the flowers of the field blossom, facing the sun.

As the nail that pierced the woman with the parasol, so has her countenance, along with the many other tranquil faces around her, wounded and scarred my heart forever, that noonday under the sun.

“Listen, my beloved brothers, has not God chosen those who are poor in the world to be rich in faith and heirs of the kingdom, which He has promised to those who love Him?” James 2:5 ESV